A Penny Per Mile was conceived about 6 miles into my first bike ride eight weeks after having surgery for prostate cancer. The long term aim is to build a free-to-use fundraising platform for anyone and everyone who wants make the activities they do in life and the challenges they undertake just that bit more valuable, and give them an incentive to do more.

Whether it’s your daily cycle to work, or training to run a marathon, why not get everyone you know to donate just A Penny Per Mile and make every mile count?

Right now I’m trying out a ‘proof of concept’ using my own challenge for this year – riding 5,000 miles with the target of raising £5,000 for Prostate Cancer UK. I’m also looking for people who can help make the full site a reality.  If you have any questions or want to offer suggestions or help then do get in touch.

With patchy internet connection and not a lot of time in the evenings before heading to bed, my plan of nightly blog posts has rather gone out of the window. I’ll write up the story of each day when it’s all over, but to keep up to date in the meantime check my facebook page at http://www.facebook.com/apennypermile 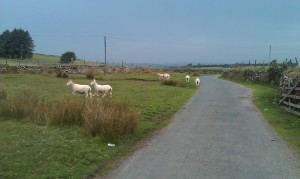 My favourite lane in Cornwall, high up above Camelford

Number of considerate Cornish and Devonish(?!) drivers: yet again, every single one of them!
Roadkill: a large number of hedgehogs, a miscellany of other small mammals, 1 pair of men’s boxer shorts (about a hundred miles from yesterday’s lady’s knickers, so I presume unrelated)
Favourite location: Okeoke something … When I remember it I’ll add it!

Having had every intention to catch up with a few posts tonight, the end of Day 4, it looks like I’m destined to run permanently 2 days behind with my blog posts!

Day 2 started with leaving all the family behind in their holiday cottage near Padstow. END_OF_DOCUMENT_TOKEN_TO_BE_REPLACED

Day 1 was fuelled by Joyce’s cheese and pickle sandwiches 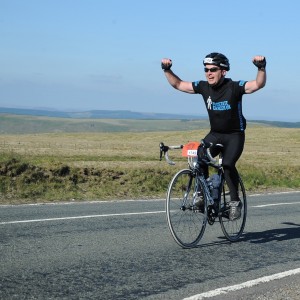 The joy of the open road!

Wow, how excited am I? The training is done, and I’m feeling good. The route is planned, and it looks fantastic. The support crew (aka mum & dad!) is prepared, and they’re raring to go. The bike is serviced and upgraded, and it’s flying along. Roll on Land’s End on Thursday 22nd August! This year has been one big cycling adventure. I started off with the intention of riding 5,000 miles, and as I write this I am comfortably ahead of target, having ridden 4,153.8 miles and with just over 1,000 miles ahead of me. I’ve ridden to Amsterdam and back, to northern France to watch the Tour, and up and down Welsh mountains.  I’ve hurtled through closed roads in London and Surrey, and I’ve climbed some brutal climbs in Devon, and gone back for more. Seven months in and not only have I cycled over 4,000 miles but I’m 20lbs lighter, 20x fitter, and feeling infinitely more healthy than I have done at any time in the last 20 years or more. So now it’s time to wrap it up with one final challenge; 1,000 miles from one end of Great Britain to the other, nine days that I am sure will provide the most enjoyable but challenging ride I have ever undertaken.

So why am I doing this?

END_OF_DOCUMENT_TOKEN_TO_BE_REPLACED

I’ve had a few requests for details about my trip, so I thought I should share. I’ll add to this page as and when I think of new things, or people ask me questions.

The aim is to cover at least 1,000 miles in nine days, and in the process also visit the most southerly and northerly points on mainland Britain.

The first night I’m with the family in a holiday cottage near Padstow, having called in on a friend in Helston on the way. The second night is with great friends Karen & Ian at Streamcombe Farm B&B near Dulverton. Then I head over the river Severn and meet up with my parents near Monmouth. They will then accompany me in their motor caravan all the way to John O’Groats an I’ll be camping up until the last night, when Jane joins me and I’m treated to a B&B and full English (Scottish?) cooked breakfast. Starting off on the last day might prove to be hard!

And some more stuff for the bike nerds … END_OF_DOCUMENT_TOKEN_TO_BE_REPLACED 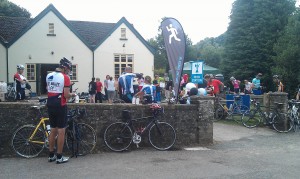 On Saturday evening I shot down the A303 to Exmouth, pitching my tent at Prattshayes Farmin eager anticipation of the Jurassic Classic, Prostate Cancer UK’s flagship cycling event. The day promised a great course, good company, and a far more relaxed atmosphere than the manic nature of last week’s Ride London. It certainly lived up to expectations.

The scenery was breathtaking as we traversed the famous ‘Jurassic Coast’ like a huge roller coaster, plummeting down steep twisting lanes, gliding through sunlit picturesque seaside towns and villages, only to hit the most brutal climbs up the other side! Fortunately the 100 mile course, complete with something like 10,000 feet of climbing (that’s not unlike a good stage of the Tour de France!), was punctuated by some well-stocked and very sociable feed stations which I can promise I made good use of, unlike my quick ‘splash and dash’ water bottle refill at the top of Leith Hill last week before bombing it back into London. The cakes from the Aylesbeare WI deserve a special mention here, and they epitomised the personable, relaxed atmosphere of the whole day. It was also great to meet up with Andy, Sara, Ellie and the whole Prostate Cancer UK team who did such a great job pulling the whole thing together. They were rewarded with great weather and loads of very happy, smiling faces as we crossed the line after a gruelling but thoroughly enjoyable ride. I for one will definitely be back next year! 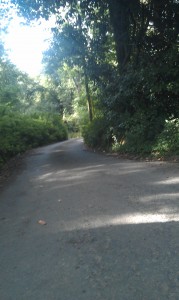 Always trust a local – follow the river I was told, but I thought I’d found a shortcut. It just happened to have a 1 in 4 hill, suitably called Hangman’s Hill!

But that wasn’t my weekend over! Conscious of the fact that this would be my last chance to get some miles in before Land’s End to John O’Groats I decided to stay a day and go for another ride, taking in the edge of Dartmoor and some more Devon Hills. The day started with a long climb, but then got really brutal as I headed into the hills. I also popped in and saw my friends Karen & Ian at Streamcombe Farm on the edge of Exmoor, before heading back down the Exe valley to where I had left the car just outside Exeter. Except encouraged by my Garmin I took a ‘shortcut’ which just happened to include a long 1 in 4 hill. The moral of the day was in Devon never think “oh, that wasn’t so bad” until you’re round the next corner, and the next one, and the one after that – the hills just come out of nowhere!

Here are the two days’ routes: 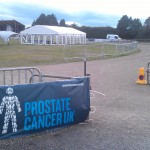 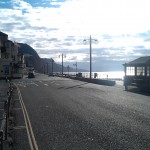 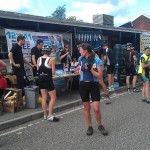 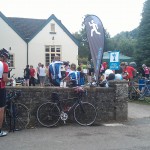 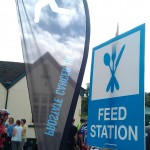 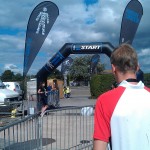 Waiting for the last riders to come in 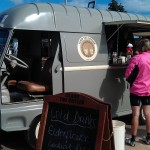 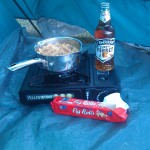 Post ride slap up meal back at the campsite! 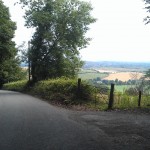 Glutton for punishment – Monday’s ride gets bumpy in the first few miles! 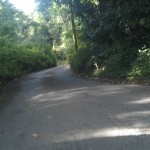 Always trust a local – follow the river I was told, but I thought I’d found a shortcut. It just happened to have a 1 in 4 hill, suitably called Hangman’s Hill! 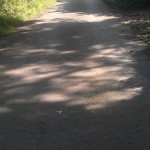 And looking up, Hangman’s Hill continues for nearly a mile 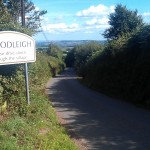 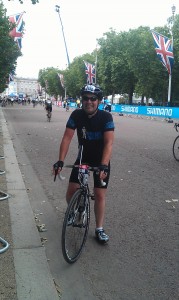 At the finish on The Mall

Nearly two years ago I was getting my diagnosis for prostate cancer. At the time I certainly had no thoughts of doing 100 miles on a bike, let alone of entertaining the idea of a 9-day, 1,000-mile Land’s End to John O’Groats ride at the end of a 5,000-mile challenge. Which is probably why, after picking up a Prostate Cancer UK flag from the wonderful team who had come out to support us in Kingston and securing it on my bike so it fluttered in front of me, the emotion almost got too much for me. Here I was bombing through closed roads in west London, approaching the finish on The Mall right in front of Buckingham Palace, and riding in what must be the most inspiring and unique event I have ever done. It could have just been me at that moment – the other 15,999 or so riders had momentarily disappeared from view – and as my eyes welled up I guess I was subconsciously reflecting on an amazing journey of an altogether different kind that I had undertaken since that fateful day.

I can honestly say, though with no small amount of guilt for those who have not been so lucky, that having prostate cancer has changed my life. I am now 20 lbs lighter, 20x fitter, and have quit my job (well, taken redundancy) and thrown myself out from the boring safety of a 9 to 5 job into the great unknown. If I did shed a few small tears as I flew through Wimbledon they were tears of joy, of exhilaration, of a new resilience that whatever the future holds there’s no challenge that’s unbeatable.

And that flag? Well, it didn’t quite make it back to The Mall in one piece (I don’t think it had been road-tested at 30mph!) but it is something that I will keep as a very poignant memory of a most unbelievable day.

There are two ways you can donate and help me raise £5,000 for Prostate Cancer UK, whose work aims to make sure that all men can be as lucky as I have been: 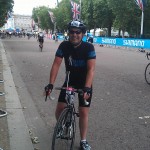 At the finish on The Mall 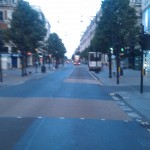 Oxford Street at 6:30am on a Sunday – about the only time you’ll get me there! 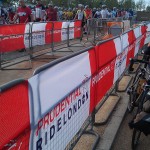 Massed start at the Olympic Park 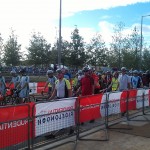 I have never seen so many cyclists in one place! 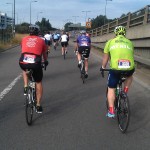 Setting off – I don’t think I saw more than 100m of clear road all day! 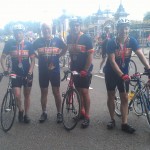 Bumped into my Dad’s club, Southgate CC, by Buckingham Palace 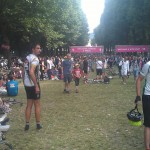 The meet & greet in Green Park was buzzing after the event 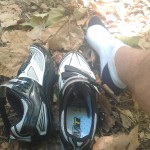 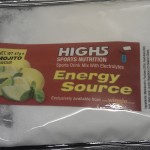 Mojito flavour energy drink from High5 – this might even get my wife cycling!

A very overdue post – I wish my blog writing was as spontaneous as my cycling! A month ago I was watching the Tour, hearing tales of all my clubmates bombing off to Paris to watch the finish, and feeling a bit left out. So I looked up the route a lo-and-behold a stage the following week was ending in St Malo, with the time trial at Mont St Michel the next day. A quick check of ferry routes and times, and to cut a long story short by Thursday evening it was booked, and the following Monday morning I was heading off on the ride from west London to Portsmouth. END_OF_DOCUMENT_TOKEN_TO_BE_REPLACED

On 9 June me and about 4,000 other cyclists tackled what is arguably one of the hardest sportives in the country, the Wiggle Dragon Ride. 130 miles, 11,000ft of climbing, this one certainly exceeds any single day that I’ll be … Continue reading →

I was booked in to the MuseumNext conference in Amsterdam last week, and when planning travel arrangements a sudden idea came to me – I know, I’ll cycle!

Having just returned after a 475 mile round trip I thought I would share my experiences, good and bad.

END_OF_DOCUMENT_TOKEN_TO_BE_REPLACED

Warning: require(/home2/apenny/public_html//scripts/justgiving/JustGivingClient.php): failed to open stream: No such file or directory in /home/apennypermile.com/public_html/wp-content/plugins/php-code-for-posts/PHPPostCode.php(79) : eval()'d code on line 2

Warning: require(/home2/apenny/public_html//scripts/justgiving/JustGivingClient.php): failed to open stream: No such file or directory in /home/apennypermile.com/public_html/wp-content/plugins/php-code-for-posts/PHPPostCode.php(79) : eval()'d code on line 2